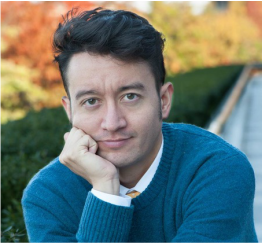 Geoffrey Silver (86-91) is now the Director of Music of Stowe School.

Geoffrey is a choral specialist who after his time as a chorister at Westminster Abbey and the RSCM, won choral and music scholarships to Tonbridge School. He went up to Cambridge on a choral scholarship to Trinity College, where he read music and history, and was president and conductor of the college music society. Later, he combined his duties as a lay clerk in the Choir of St John’s College, Cambridge, with his post-graduate research on the development of private and public funding of classical music between the wars. He also founded a music technology start-up in Silicon Fen.

In his work as a record producer, “Acis” – his own label, named after Handel’s opera – has received critical acclaim on both sides of the Atlantic: Fantasticus, his second album of early music ensemble, Quicksilver, was nominated by Alex Ross of the New Yorker as one of the publication’s top ten albums of 2014 – Gramophone praised it as “fantasticus, indeed”; Renée Anne Louprette’s, BACH, The Great Eighteen Chorales was a New York Times critics’ choice representing 2014. Geoffrey is currently editing and mixing several projects, including a commemoration of the composer George Butterworth’s centenary, a remix of the Bach cello suites, and Messiah for Julian Wachner and the Choir of Trinity Wall Street.

As a soloist, Geoffrey has been praised by the Wall Street Journal for his “quiet lyricism” in Messiah, has featured live on BBC Radio, toured the USA, Europe, southern Africa and Asia, and appeared on numerous commercial recordings. He recently made his Carnegie Hall debut in a performance of Ginastera’s monumental work, Turbae ad Passionem Gregorianam.

​Geoffrey was Chorus Master of The Washington Chorus in the USA, and had responsibility for auditioning and rehearsing its 195-strong membership and leading its outreach, youth and education programmes in schools. Geoffrey has also helped build and prepare the chorus for appearances at the Kennedy Center and Wolf Trap Opera with the National Symphony Orchestra and other ensembles. During his 13 year tenure in the USA, he has directed major after-school music programmes in New England, built a successful private singing practice, run an HIV charity in the sub-Sahara, co-founded and established the instantly recognizable sound of the twice GRAMMY-nominated vocal quartet, New York Polyphony with whom he toured and recorded, produced the twice GRAMMY-nominated Choir of Trinity Wall Street, sung with The Rolling Stones on their 50th anniversary tour, and conducted at the White House.