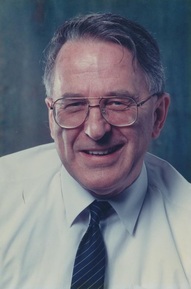 Grahame Gibbs (44-48???) was born in Northwood, Middlesex, England, the eldest of five sons of Frank and Marjorie Gibbs. One of his earliest memories was standing at an upstairs bedroom window during the Blitz, to observe the London firestorm on the distant horizon.

His parents and teachers encouraged his love of music and he learned piano and violin from an early age. While at the local Holy Trinity primary school, he and his brother Colin both successfully auditioned for the Westminster Abbey wartime choir and he attended Harrow County School until the Abbey Choir School reopened in 1947. He became senior chorister and head boy after he and Colin sang at the wedding of Princess Elizabeth and Duke of Edinburgh in 1947.

Grahame wore a new senior chorister’s medal given by Field Marshall Bernard Montgomery, 1st Viscount Montgomery of Alamein. As a later music scholarship boy at Sedbergh School in Cumbria, his limited financial resources and social status were dramatically enhanced when, as requested, he wrote each month to “Monty”. He always received a reply in an embossed, crested envelope — and some pocket money! Monty also had presented him with a half-hunter watch and citation when he won a scholarship to Sedbergh.

Sir William McKie (organist and master of the Choristers at the Abbey) would take him to a concert in London during school holidays — each time giving him the musical score to follow, a habit Grahame retained. Our young sons little appreciated at the time how privileged they were to be seated on the knee, or gathered around Sir William, as he played them nursery rhymes and we sang around our piano, each time he visited family and friends Down Under.

While at Sedbergh, Grahame was auditioned by Ruth Railton, who was touring the UK to seek likely candidates for the proposed National Youth Orchestra of Great Britain. Grahame, violist, and Andrew Jowett, oboist, were chosen from Sedbergh and enjoyed several years with the orchestra, playing many concerts, including those at the Edinburgh Festival and Royal Albert Hall, under the baton of the great conductors of the day such as Vaughan Williams, Beecham and Bolt. He and his wife were guests at the NYO 50th Anniversary concert and reception at the Barbican, London, for a joyous reunion of the ‘old guard’ in 1998.

At the age of eighteen Grahame began National Service in the Royal Artillery and made some good friends, emerging as Lieutenant Gibbs while remaining on the Defence Reserve List. However, he realized this was not to be his chosen career.

Meanwhile Grahame had joined the Royal Amateur Orchestral Society (as a viola player) founded by the late Prince Albert, Consort of Queen Victoria. When returning to London in 1961 he rejoined this orchestra for the duration of a two-year work/study honeymoon and played in a number of concerts — a special memory was when we attended the orchestra’s Royal Command Performance at St James Palace — with Grahame playing his viola. We have enjoyed several enduring friendships and return visits between England and Australia from his time at the Abbey, Sedbergh and the orchestras. He sang with the Purcell Choir at the Abbey on return visits — last time in 2007. When he missed out on a music scholarship to King’s College Cambridge, he came to accept that music would be his love, but engineering would be his career, about which he eventually became equally passionate. He studied at the Regent Street Polytechnic and the National College, which later became the London South Bank University.

Grahame came to Sydney, Australia, in July 1958 as the first employee of a newly established engineering consultancy, D Rudd & Partners. He had introductions to Dr Noel Nixon at the Sydney Conservatorium (where he was invited to join the orchestra) and to Dean Pitt at St Andrew’s Cathedral where he became a lay clerk and was married on 24 June 1961. He had been introduced to his future wife in September 1959 and proposed successfully forty days later — to her parents’ concern and a request to wait until at least New Year’s Eve to be certain, before broadcasting the news! An eighteen-month engagement then followed while they saved for a honeymoon voyage on Southern Cross, to UK via the Panama Canal, to meet his family, work and undertake further study plus continental travels in their Mini Minor. They returned to Sydney in September 1963. Their magical bond lasted through almost 52 years of marriage; clearing the land and building a home in St Ives, NSW; the birth of four sons, Alexander in December ’63, Jonathan October ’66, Timothy December ’68 and Cameron March ’71; eventual daughters-in-law and twelve terrific grandchildren (six boys and six girls).

Singing in choirs continued, according to family stages at various churches; with the Oriana Singers and later the Jacobean Singers; while he formed the Bradfield Children’s choir with his wife in the seventies. Grahame and the boys all sang together in the choir at S James, King Street, Sydney, when Howard Hollis (a former Canon at Westminster Abbey in Grahame’s time there) was Rector. He played his viola in amateur chamber music groups and for a time with the Ku-ring-gai Philharmonic Orchestra … but singing was his major outlet. The pressure of work and professional activity, family, school and sporting commitments, as well as his wife becoming a local alderman, ensured there was always lively discussion around the dinner table! When their youngest son entered university, Grahame encouraged his wife to undertake a Master of Safety Science that led eventually to her doctorate in the field of their combined professional concerns about risk management in complex health industry systems.

As a young man in England he played cricket with the Northwood club … and was an occasional wicket keeper and player for that club while back in England on his honeymoon. In Australia he was a keen squash and golf player for a number of years and he later enjoyed family tennis club activity. Until his major stroke in 2008 he and his wife enjoyed a monthly dinner and billiards evening with friends as well as playing Bridge as often as possible. Most family holidays involved the many activities associated with various projects on the sheep & cattle farms of close friends.

Grahame became an Associate of D Rudd & Partners Australia before initiating his own consultancy in 1973, specializing in controlled environments and cleanroom related activities.

He spent a number of years in the late seventies with Email Air Handling Division as Engineering Services Manager to influence the manufacturing of cleanroom and biological safety cabinet equipment. In the early eighties he joined Wildridge & Sinclair to set up a cleanroom contracting section with Alan King, a Director and fellow member of the Australian Institute of Refrigeration, Air Conditioning & Heating (AIRAH). After he had been awarded Chartered Engineer status by the Engineering Council UK, he briefly joined Norman Disney and Young in the late eighties until the nineties recession bit hard. Once again he was on his own and gradually rebuilt his building services engineering consultancy having become a Chartered Professional Member of Engineers Australia.

At this time he was invited to lecture at the University of Technology Sydney (UTS) and his workload as a casual academic gradually increased to cover various aspects of Building Services Engineering Design and Facility Management, in the Department of Design, Architecture and Building. He later added Engineering Communication to his teaching portfolio when he joined his wife who had begun teaching this subject in the Engineering Faculty at UTS in February 2001. They continued doing this until his major stroke while on a mid-year holiday in New Zealand (2008) forced their retirement from face-to-face teaching.

He enjoyed challenges and undertook various innovative design commissions in the area of controlled environments for hospitals, avionics, computer centres, pharmaceutical and veterinary laboratories, baby food manufacture and even the first non-government Australian quarantine facility for poultry breeding. His overseas projects apart from UK and Australia involved Kuwait, Singapore, New Zealand, Fiji and Tonga. While in Tonga, he followed the sound of the Messiah being sung one evening in a forest open-air rehearsal. He was welcomed and invited to conduct the King’s Choir, where the singers used Tonic Sol-fa rather than printed musical scores. That was a very special experience.

Throughout his working life Grahame was an active participant in professional development activities with AIRAH and CIBSE meetings, seminars and international conferences. He won the AIRAH WH Ahearn medal in 1984 for the best technical paper published in 1983 and had some ten papers published in the AIRAH Journal over the years. He continued to present and publish papers for various professional journals, workshops, seminars and conferences as long as his health allowed.

Following his design work for the Qantas Avionics Laboratory in the late sixties, Grahame was invited to become the Foundation Chairman of the Standards Australia Controlled Environments Committee, a position he held for thirteen years. He then continued as the AIRAH Delegate until his death, as well as being a committee delegate to the International Standards Organisation, attending meetings in London, Dusseldorf, Berlin and Sydney. As the range of cytotoxic drugs grew, the committee sought input about the human factors relating to the design & use of a biological safety cabinet. His wife was co-opted at first and later became the (now) Human Factors & Ergonomics Society of Australia’s delegate on this committee. As she was undertaking a Master of Safety Science at the time, the committee encouraged her to undertake a research project which led eventually to her 1998 doctoral thesis — Safety: a complex interactive and adaptive systems model depicted by health industry workers handling cytotoxic drugs (relating to all aspects of handling the drugs from manufacture, transport, compounding, dispensing, and patient treatment to waste disposal). As the years rolled by, Grahame and his wife developed ever-closer involvement with their shared professional interests.

For a number of years in the early eighties he was the Foundation Secretary of the Australian Contamination Control Society (ACCS) as well as being a member of the International Society for Pharmaceutical Engineering. His wife was elected President of ACCS in 2001 & 2002.

In the nineties, Grahame was also active on the AIRAH NSW committee and served for three years as NSW Chairman and a national AIRAH Board member. He was also involved in the development of CIBSE ANZ Region and served as one of its original committee members, later becoming Regional Chairman and later ANZ Almoner, which latter position he held until his death. He was active in both organizations’ industry outreach in the form of workshops, seminars and conferences at state, national and international levels.

In the early nineties he was approached by Professor ‘Jack’ Cowan at Sydney University to assist in the establishment of a Master of Design Science under the direction of Professors Warren Julian and Fergus Frickie. His wife became their official Senior Research Assistant for the preparation and start-up of the course … a position she also held at UTS when Grahame was on the Advisory Committee for its Building Technology Bachelor Degree that would link with the Sydney University program.

For his work in advancing the relevance of building services engineering over the years, Grahame was awarded the CIBSE Bronze Medal and later Silver Medal. He was admitted to the Australian Air Conditioning Refrigeration and Building Services (ARBS) Hall of Fame in May 2012, as recognition of his outstanding service, contribution and commitment to the industry, above and beyond the call of duty. It was acknowledged that he had worked tirelessly and in most cases, voluntarily, to achieve demonstrably beneficial outcomes.